Abstract: Electrifying critics and readers alike with her award-winning novels, bestselling author Val McDermid spins another masterful thriller, which reveals the dark dreams of her most ingenious-and chillingly believable-villain yet. No evil can resist. Coming to terms over her breakup with criminal profiler Dr. Tony Hill, Chief Inspector Carol Jordan plunges into a risky undercover sting: track down a European drug trafficker and gain his confidence. But she's being tracked as well-by a serial killer whose psychosexual madness is born out of the darkest corners of history. No victim can escape. In quiet isolation, Tony Hill is laying to rest the scars of his past-until he's recruited back into business on a case he can't ignore. An evil is striking uncomfortably close to home, and casting a killer shadow over the life of his long-time colleague and sometimes lover. "The Last Temptation As the danger closes in, and as Tony and Carol cross paths to navigate the terrain of a shattered human mind, they have no one left to trust but themselves-and fear that there's no place left to run as a killer promises to fulfill his most twisted dreams. 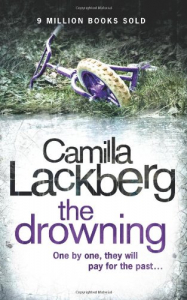 The drowning / Camilla Lackberg ; translated from the Swedish by Tiina Nunnally.
0 0 0

The drowning / Camilla Lackberg ; translated from the Swedish by Tiina Nunnally.

The drowning / Camilla Lackberg ; translated from the Swedish by Tiina Nunnally. - Copie

A ticket to oblivion / Edward Marston.